Starved, tortured, bombed: the fate of refugees trapped in Libya

NGOs have sounded the alarm regarding overcrowded and unsanitary conditions at camps in Libya -- such as this one at Zawiyah, west of Tripoli.

INTERNATIONAL NEWS - Acute malnutrition, forced labour, torture: NGOs have sharpened their tone against the shocking conditions endured by refugees and migrants in Libya, where over 40 people were killed in an air strike on a detention centre.

Tuesday night's strike on the centre at Tajoura near the capital Tripoli, in which 70 people were wounded, underscored the vulnerability of the mainly African migrants trapped in conditions the UN has called "ghastly".

Their plight has been blamed by NGOs on an agreement between EU nations and the Libyan coastguard to prevent the migrants from reaching Europe's shores by boat.

Since January, over 2,300 people have been intercepted at sea and brought back to Libya, according to the UN.

Once back in Libya, they are transferred to detention centres like the one in Tajoura.

The situation has deteriorated further since Libyan strongman Khalifa Haftar, whose forces have been blamed for the airstrike, launched an offensive in April to capture Tripoli, triggering a wave of violence in which over 700 people have been killed.

"There is a certain blindness among European countries among the situation of migrants in Libya," Vincent Cochetel, special envoy for the Central Mediterranean at UN refugee agency UNHCR told AFP. 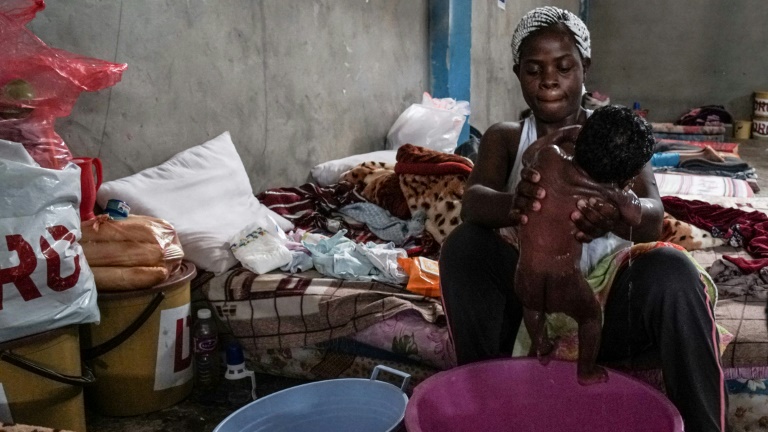 NGOs blame the migrants' plight on an agreement between EU nations and the Libyan coastguard to prevent them from reaching Europe's shores by boat.

"The recent fighting has created an even worse situation. It cannot be business as usual in terms of this cooperation (with the EU) on returns to Libya," he argued.

The levels of despair among the migrants are such that in May, a man in a rickety boat who spotted the coastguards approaching jumped into the sea rather than be captured - a scene captured on video by German NGO Sea-Watch.

The man was later rescued by a passing ship.

EU on the defensive

Excruciating footage filmed inside hidden prisons run by human traffickers that was broadcast by Britain's Channel 4 in February gives some idea of the brutality inflicted on migrants by militia members who use them to try to extort money from their families.

In one clip, a man is seen lying on the floor, screaming in agony as his captor burns his feet with a blowtorch. Another man, wearing a bloody t-shirt, is suspended from the ceiling by his feet, a gun pointed at his head.

A third is bound and lying face down, a huge concrete block crushing his back and arms as someone flogs the soles of his feet.

According to figures from the International Organization for Migration, at least 5,200 people are currently trapped in official detention centres in Libya, mostly from troubled countries such as Sudan, Somalia and Eritrea.

There are no figures for the number of people held in illegal centres run by human traffickers.

The EU has fended off criticism of its pact with the Libyan coastguard on the ground that it has dramatically reduced the flow of migrants seeking to reach Italy, which began turning away rescue boats a year ago.

Questioned by AFP, the European Commission defended its record, saying that since 2014 it had raised some 338 million euros for programmes linked to migrants in Libya and helped with the repatriation of 38,000 people in the past 16 months.

"We are extremely concerned by the deterioration of the situation on the ground," Commission spokeswoman Natasha Bertaud recently told AFP.

The Commission, she said, was hamstrung by the failure of EU members to agree on common approach towards migrants and asylum-seekers.

When NGO vessels rescues people in the Mediterranean, "it effectively falls on the Commission to ring round nearly 28 capitals to find places for people to disembark," she said, adding: "That is not sustainable!"

The dead piling up

Ten NGOs working in Libya, including the Danish Refugee Council, the International Rescue Committee and Première Urgence Internationale (PUI), decided in May to break their silence on the catastrophic conditions there. 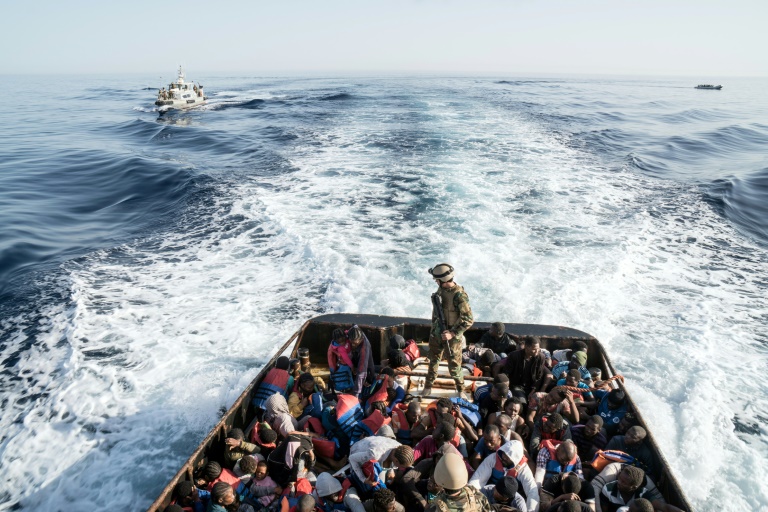 The Libyan coastguard take back migrants they have rescued towards  Zawiyah -- but some have preferred to take their chances by jumping into the sea rather than endure the conditions of some detention centres.

They called on the EU and its member states "to urgently revise their policies on migration", saying they were "gravely concerned about the human cost" of such policies which were encouraging "a system of criminalization and detention".

"Migrants and refugees, including women and children, are at risk of arbitrary and indefinite detention in Libya" where they are held in "appalling" and "inhumane conditions", they said.

Benjamin Gaudin, who heads the Libya operations of French NGO Première Urgence Internationale (PUI), called on the EU to stop sending migrants back to Libya altogether.

Describing conditions in the six official detention centres where PUI works, Gaudin said: "At times, the migrants are literally piled up on top of each other, in appalling sanitary conditions with huge problems getting access to water - sometimes there is no drinking water at all."

"They don't receive enough food; in some centres, there is absolutely no way to protect yourself from the cold or the heat. Some don't even have an outside area so the migrants there never see the light of day."

Human Rights Watch, which visited many detention centres in 2018 and spoke to about 100 migrants, documented the "cruel, inhuman and degrading treatment" suffered by migrants in a report earlier this year.

"The bodies are piling up inside Libyan detention centres," Julien Raickman, who heads the Doctors Without Borders (MSF) mission in Libya, told AFP.

"The people who are detained there, mostly refugees, are continuing to die from sickness, hunger and are victims of all sorts of violence, of rape and the arbitrary treatment of the militias," he said.

And now, he added, "they have found themselves trapped by the ongoing conflict."

'Locked up for a year'

Their plight was taken up last month by the Council of Europe, a pan-European rights watchdog whose human rights commissioner asked European countries to suspend their cooperation with the Libyan coastguard on account of the "torture, rape, slavery, exploitation or indefinite and unlawful detention" suffered by migrants.

The UNHCR on June 7 denounced the "ghastly conditions" in the centres, with spokesman Rupert Colville saying 22 people had died in an outbreak of tuberculosis at a facility in the western Libyan town of Zintan since September.

MSF, which has recently begun operating in Zintan as well as Garyan, a city south of Tripoli, spoke of a "sanitation catastrophe".

According to the NGOs and the UNHCR's Cochetel, the vast majority of those trapped in these centres are bona fide refugees, who would be granted asylum in a developed country. 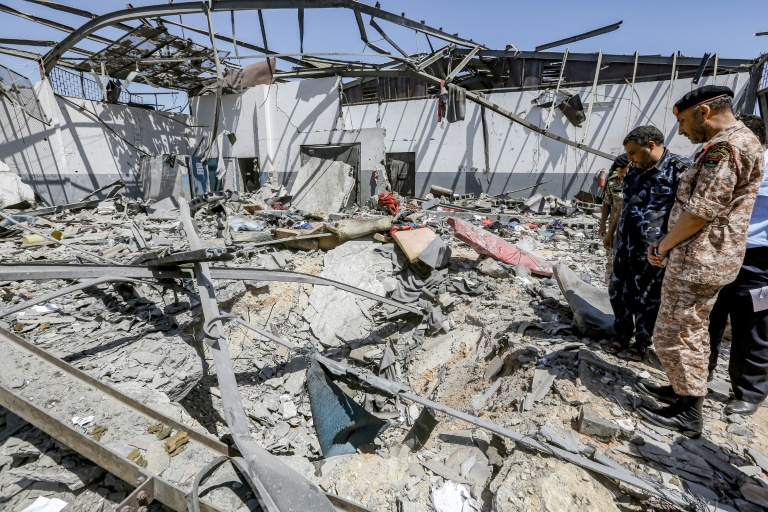 The air strike on a detention centre at Tajoura outside Tripoli and blamed on the forces of Khalifa Haftar left dozens of migrants dead and underscored the vulnerability of the mainly African migrants trapped in conditions the UN has called "ghastly".

The UNHCR has, however, struggled to find safe countries in Europe or elsewhere willing to take in the refugees.

"There is a strong sense of despair over this impasse: in centres where we have been working in the region of Misrata and Khoms, people have been locked up for a year," MSF's Raickman said.

General Ayoub Kacem, spokesman for the Libyan navy, which is in charge of the coastguard, argued that Libya was a "victim" of the migration flows.

Calling the migrants a "burden" for the country he accused the EU of "lacking concern" for their fate and urged EU members to finally adopt a common approach to the issue.

For MSF's Raickman it is long past time for talking.

"European states have a scandalous level of responsibility for all these deaths and this suffering," he told AFP.

"What we need is action: the urgent evacuation of refugee and migrants who are trapped in extremely dangerous conditions in Libya."