Unemployed can apply for R350 grant

The application system for the grant opened as of noon as part of government's COVID-19 relief programme for the unemployed.

At a media briefing on Monday morning, Social Development Minister Lindiwe Zulu called on those interested to be patient as the system is expected to be flooded with applications.

Applicants must be unemployed, over 18 years old, and not be receiving any other state grant.

Government has made several platforms available for unemployed citizens to apply for the grant.

An ID number, name and surname, together with banking details and cell phone number must be provided.

A home address must also be provided, but those with smartphones can use their GEO locations to make the process easier.

South African Social Security Agency CEO Busisiwe Khambula said: “And in instances where people are employed, we are going to be able to take all the database that we have that will run through Sars to check as to whether those people are actually unemployed because we know that in many instances people do take chances.”

Khambula said they would be vigilant against fraud and has called on beneficiaries not to give their cards to loan sharks.

She also said systems would be strengthened to help those without technology. 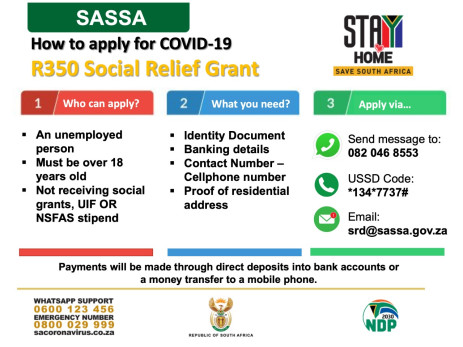