Belfast residents pass a mural featuring murdered journalist Lyra McKee, whose death sparked a new round of political talks chaired by the British and Irish Governments, in May 2019.

INTERNATIONAL NEWS - Forty-nine journalists were killed across the world in 2019, Reporters Without Borders said Tuesday, the lowest death toll in 16 years.

Some 80 journalists a year have lost their lives on average over the last two decades, said the organisation, which is known by its French initials RSF.

But its head Christophe Deloire warned that the number of journalists murdered in countries supposedly at peace was still alarmingly high, with 10 dying in Mexico alone.

"Latin America, with a total of 14 reporters killed across the continent, has become as deadly as the Middle East," he added. 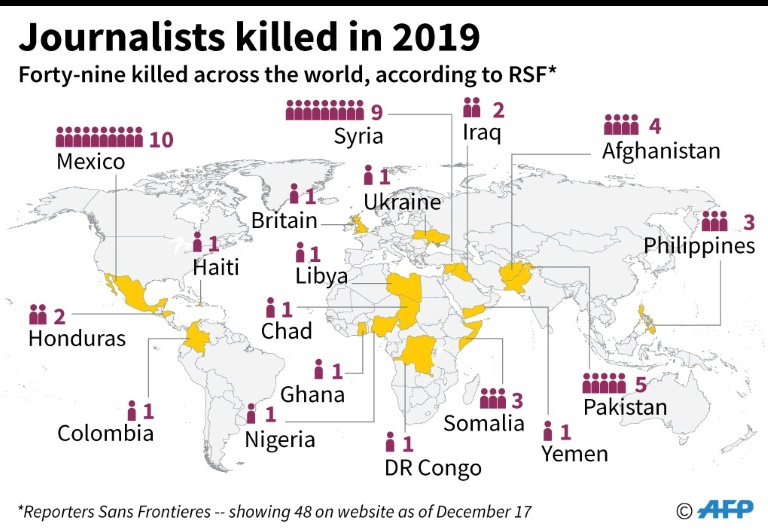 While he said that the fall in the number of fatalities in conflict zones was something to celebrate, "more and more journalists are being assassinated for their work in democratic countries, which is a real challenge to democracy."

While fewer journalists are dying, more are ending up behind bars, according to RSF.

Nearly half were imprisoned in three countries - China, Egypt and Saudi Arabia, which was blamed for the gruesome murder of columnist Jamal Khashoggi at its embassy in Istanbul last year.

"China, which has intensified its repression of the (mostly Muslim) Uighur minority, alone holds a third of the journalists locked up in the world," RSF said.

Meanwhile, 57 journalists are being held hostage across the globe, mostly in Syria, Yemen, Iraq and Ukraine.

"There has been no notable freeing of hostages this year despite major developments in Syria," the RSF said, which has led it to fear for the worst for many of those abducted.