The auto industry would be among the hardest-hit sectors under the new tariffs on Mexico announced by President Donald Trump.

MOTORING NEWS - President Donald Trump's plan to impose tariffs on Mexico will affect myriad industries, but few are as exposed as automakers.

Shares of several major automakers and auto suppliers dived five percent or more following Trump's announcement Thursday night that the United States would impose a five percent tariff on all Mexican imports on June 10, explicitly linking the trade action to a demand that Mexico crack down on illegal immigration.

The White House intends to gradually raise the tariff level until it hits 25 percent on October 1, a levy that "could cripple the industry and cause major uncertainty," said a note from Deutsche Bank.

Industry analysts estimate that about 15 percent of cars sold in the United States are imported from Mexico, while automakers also import billions of dollars' worth of parts manufactured by companies like Lear and Delphi.

The move comes after both Ford and GM have unveiled cost-cutting plans as the US market cools from a series of record-setting years.

"The US auto industry is already facing a number of headwinds, as new-car sales slow and higher interest rates put pressure on US consumers," said Michelle Krebs, an analyst at Autotrader, said in an email.

Trump said on Twitter that the tariff action will prompt companies to "leave Mexico... and come back to the USA."

But auto analysts have noted that the industry tends to make long-term investment decisions on manufacturing that are not easily reversed, viewing North America as a single market for supply chain purposes.

"The auto industry doesn't move at the speed of a tweet," said Jessica Caldwell, Edmunds executive director of industry analysis. "Without any details of exactly how Trump will measure success, at this point all automakers can do is hope this is just another empty threat."

The American Automotive Policy Council, which represents Fiat Chrysler, Ford and General Motors, gave "strong" support the Trump administration's efforts on the new North American trade pact, for which Trump formally kicked off the ratification process in Congress on Thursday.

"But it relies on duty-free access to be successful," said AAPC President Matt Blunt.

"The imposition of tariffs against Mexico will undermine its positive impact and would impose significant cost on the US auto industry."

Heavy impact on suppliers
Major models built in Mexico that would be hit by Trump's latest tariffs include the Chevrolet Silverado and GMC Sierra as well as Fiat Chrysler's Ram trucks, according to Deutsche Bank, which said a 25 percent tariff would add $23 billion in costs in total. 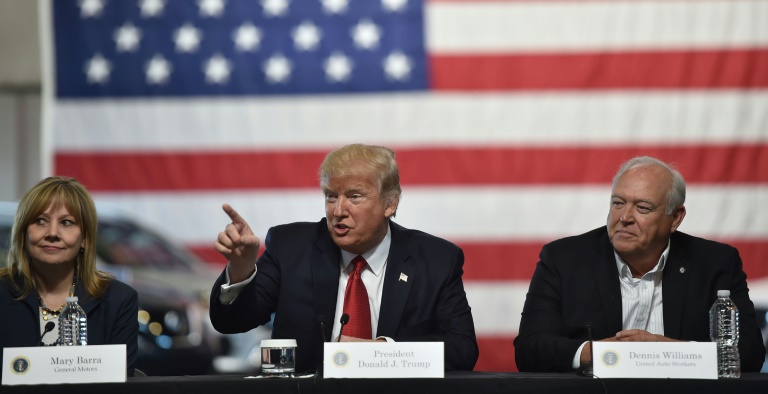 Donald Trump, shown here with GM Chief Executive Mary Barra and former United Auto Workers President Dennis Williams in 2017, has had a turbulent relationship with the auto industry, in part due to disagreements on trade.

GM is building its new Chevrolet Blazer, a sports utility vehicle targeted at the US market, in Ramos Arizpe, Mexico, a move that has been a sore spot with the United Automobile Workers labor union.

The automaker, which has heavily promoted the new 2019 Blazer, earlier this year quietly removed the foreign-made vehicle from the Detroit Tigers' stadium, Comerica Park, and replaced it with an American-made Chevrolet Traverse, according to a report in The Detroit Free Press.

Auto supply companies such as Lear and Aptiv also will be hit by the tariffs.

Lear, which supplies seating, electrical distribution systems and software to automakers, builds parts in Mexico where it had 51,200 employees at the end of 2018, 30 percent of its total workforce and more than 10 times its staffing in the United States and Canada.

The company listed nearly two dozen production facilities in a US securities filing.

Operating profits for leading supply companies could be cut by as much as 50 percent, said Deutsche Bank.

"With the entire supply chain of certain components coming from Mexico, suppliers could eventually pass on much of the higher costs to automakers," Deutsche Bank said.