Trudeau cites US ratcheting up tensions with Iran in plane's downing

Canadian Prime Minister Justin Trudeau (pictured 11 January) said the tensions in Iran that caused a jetliner to be shot down were "brought about by US actions".

INTERNATIONAL NEWS - Victims of an Iran-downed jetliner would still be alive if not for a recent escalation of tensions partly triggered by the United States, Canadian Prime Minister Justin Trudeau said Monday.

"I think if there were no tensions, if there was no escalation recently in the region, those Canadians would be right now home with their families," Trudeau said in an interview with Global television, according to a transcript shared with other media.

He added that the international community has been "very, very clear about needing to have a non-nuclear Iran" but also in "managing the tensions in the region that are brought about by US actions as well."

The Ukraine International Airlines Boeing 737 was shot down by a missile shortly after taking off from Tehran before dawn last Wednesday, killing all 176 on board.

By Ottawa's count, 57 of the passengers were Canadian citizens, many of them dual Iranian nationals.

Longstanding US-Iran tensions have soared since January 3 when missiles fired from a US drone killed a top Iranian commander, Qasem Soleimani, near Baghdad's airport.

Iran responded with a barrage of missiles at two US bases in Iraq, inflicting no casualties in what was seen as an attempt to prevent a spiral of escalation.

Trudeau also said he would have "obviously" liked a heads-up from Washington about the drone strike on Soleimani.

'Somebody's responsible'
Over the weekend, Trudeau demanded that Iran provide Canada with "full clarity" on the airliner shootdown.

The prime minister said he made the demand in a call with Iran's President Hassan Rouhani, who admitted earlier Saturday that the airliner was mistakenly shot down by Iranian missiles.

At a televised press conference on Saturday, Trudeau said he told Rouhani the admission was "an important step" but "many more steps must be taken."

"A full and complete investigation must be conducted," he said. "We need full clarity on how such a horrific tragedy could have occurred."

A Toronto law student who lost his mother in the crash echoed Trudeau's statement in an interview with AFP.

"Once you start to cope with the sorrow a little bit, then came the tragic news that it was downed by a missile, and it was almost as if she died again," Amirali Alavi said. 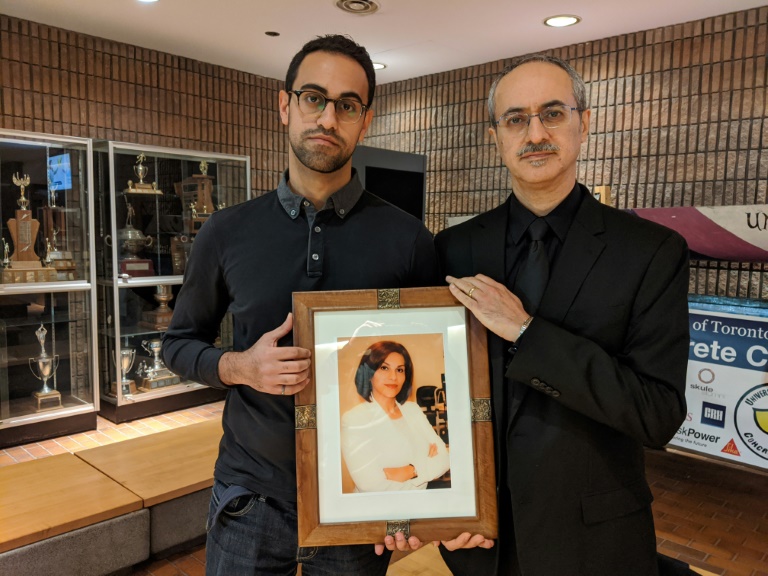 Amirali Alavi (L) holds a picture of his mother Neda Sadighi, one of the victims of Ukrainian Airlines flight 752, with his father Farzad Alavi (R) at his side on 12 January at the University of Toronto, Canada.

The 27-year-old said that "thinking how it could have been avoided, how somebody's responsible for it" made him furious and inconsolable.

The accident was a deep blow to the Iranian community in Canada, which is home to North America's largest Iranian diaspora. According to the last census, there were 210,000 Canadians of Iranian origin living in this country in 2016.

"I am, of course, outraged and furious that families across this country are grieving the loss of their loved ones, that the Iranian-Canadian community is suffering so greatly, that all Canadians are shocked and appalled at the senseless loss of life," Trudeau said Saturday.

"It's a huge tragedy for the entire country and not just for the Iranian community."

Asked whether Ottawa would demand that Tehran pay financial compensation to the families of Canadian victims, Trudeau indicated that it would.

The prime minister also said he insisted to Rouhani that Canada be allowed to participate in the investigation.

Three members of a Canadian rapid deployment team flying to Tehran will have access to the plane's wreckage and blackboxes, Iranian officials confirmed Monday.