A video image released by the Fishermen and Friends of the Sea NGO on October 22, 2020 shows the tilted Nabarima oil tanker

INTERNATIONAL NEWS - Trinidad and Tobago said Thursday that a damaged oil tanker off the island's coast was "stable" after opposition politicians in neighboring Venezuela warned of a potential "environmental catastrophe."

The damaged tanker, which is in the waters separating Venezuela and Trinidad and Tobago and is owned by Venezuelan state oil company PDVSA, threatens to spill 1.3 million barrels of crude into the water.

"The ship is straight and stable without any visible risk of sinking," Energy Minister Franklin Khan said during a video conference in Puerto Espana.

The Nabarima tanker, anchored for several months in the Gulf of Paria, is used to store oil, but video footage shared on October 16 by the Fisherman and Friends of the Sea NGO showed it tilting.

The findings showed that "there was no water ingress on the vessel visible to the team. Which means the ingress reported in early September no longer exists," the minister said.

According to Khan, the team reported that maintenance tasks were being carried out on the ship, such as repairing and replacing pumps and electric motors if necessary, which the experts described as "quite satisfactory." 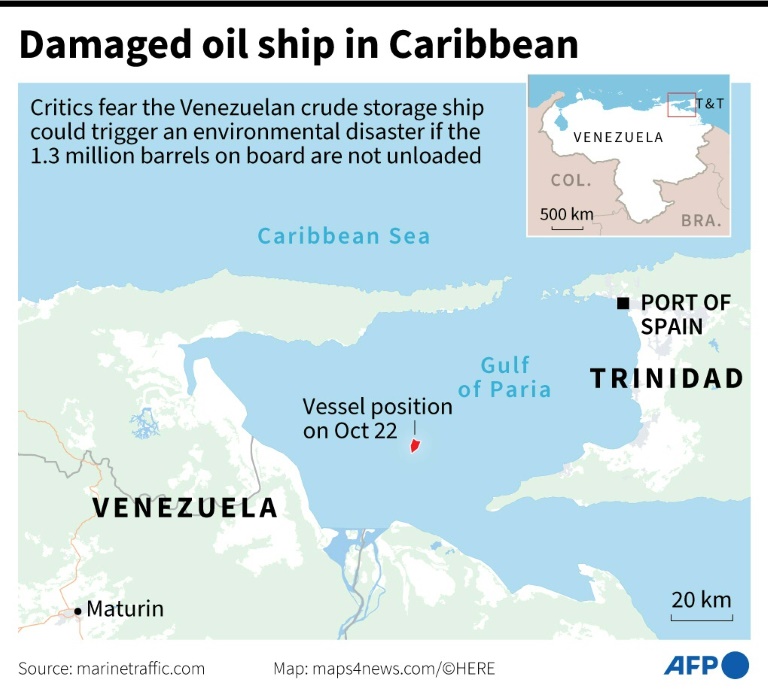 But he told AFP those problems "have been ignored" by PDVSA.

Girot said several PDVSA employees reported on October 12 that the tanker was listing by eight percent while the engine room is flooded and water pumps have broken down.

"If the oil is not transferred, and even if the Nabarima can be stabilized, we risk a permanent environmental catastrophe," Venezuelan opposition legislator Robert Alcala told AFP.

The Nabarima is owned by Petrosucre, a company majority owned by PDVSA, with Italian multinational oil and gas firm Eni holding a 26 percent share.

According to Luis Stefanelli, another opposition legislator, PDVSA has sent two ships to try to unload the Nabarima.

PDVSA on Tuesday started transferring the crude oil stored on the Nabarima with the vessel Icarus, according to the Trinidadian government.

However, Khan recommended using a larger vessel, since the Icarus can barely hold a quarter of the tanker's 1.3 million barrel-load.

PDVSA has not commented but last month it branded as "fake news" claims by environmentalists that the Nabarima was in a state of disrepair.

The operation to transfer the oil has been hindered by US sanctions against PDVSA.

Trinidad and Tobago has established a contingency plan to prevent damage in case the tanker's cargo spills.

Oil spills are common in Venezuela due to a lack of infrastructure maintenance.

The South American country is almost entirely dependent on its oil revenue, but production has dropped from 3.2 million barrels a day over a decade ago to just 400,000 now.

The opposition and analysts accuse the government of corruption and neglect while the Maduro regime blames US sanctions.