“It’s awesome; it’s such a great feeling,” said Macnab with a smile that could light up the world.

GolfRSA No 1 Caitlyn Macnab made history as the first amateur winner in 14 years on the South African women’s professional golf circuit when she powered to an eight-shot victory in the Sunshine Ladies Tour’s Jabra Ladies Classic at Glendower Golf Club. Photo: Sunshine Ladies Tour.

In a scintillating final round, the 19-year-old GolfRSA No 1 sealed the victory in breath-taking fashion, firing five birdies on the back nine for a closing five-under-par 67.

“It’s awesome; it’s such a great feeling,” said Macnab with a smile that could light up the world.

The Ekurhuleni golfer had squandered a chance to rewrite the history books in season-opening Cape Town Ladies Open at Royal Cape Golf Club with a double bogey late in the final round, and she was absolutely delighted to pull it through in her home union.

“There is a lot more pressure when you play against the pros, and last week in Cape Town I didn’t really know what to expect heading into the final day with a share of the lead. This week I felt a lot more comfortable, and playing here at Glendower was great. It’s such a great course.

“I won the SA Women’s Stroke Play and the Match Play twice and I’ve represented South Africa a few times, so this ranks right up there with my greatest achievements. I am over the moon, because this is huge for me. The theme this year is #levelup and I feel I’ve done exactly that. Following in Ashleigh’s shoes is pretty special.

“I wanted to come out this season to build experience and to test myself. There are still a lot of amazing opportunities ahead this season, but it’s a fantastic feeling to get it done. I’m really grateful to my whole team for getting me here.”

Macnab began the final round with a one-shot lead over Lindi Coetzee and had a three stroke advantage over seasoned winner Lee-Anne Pace. 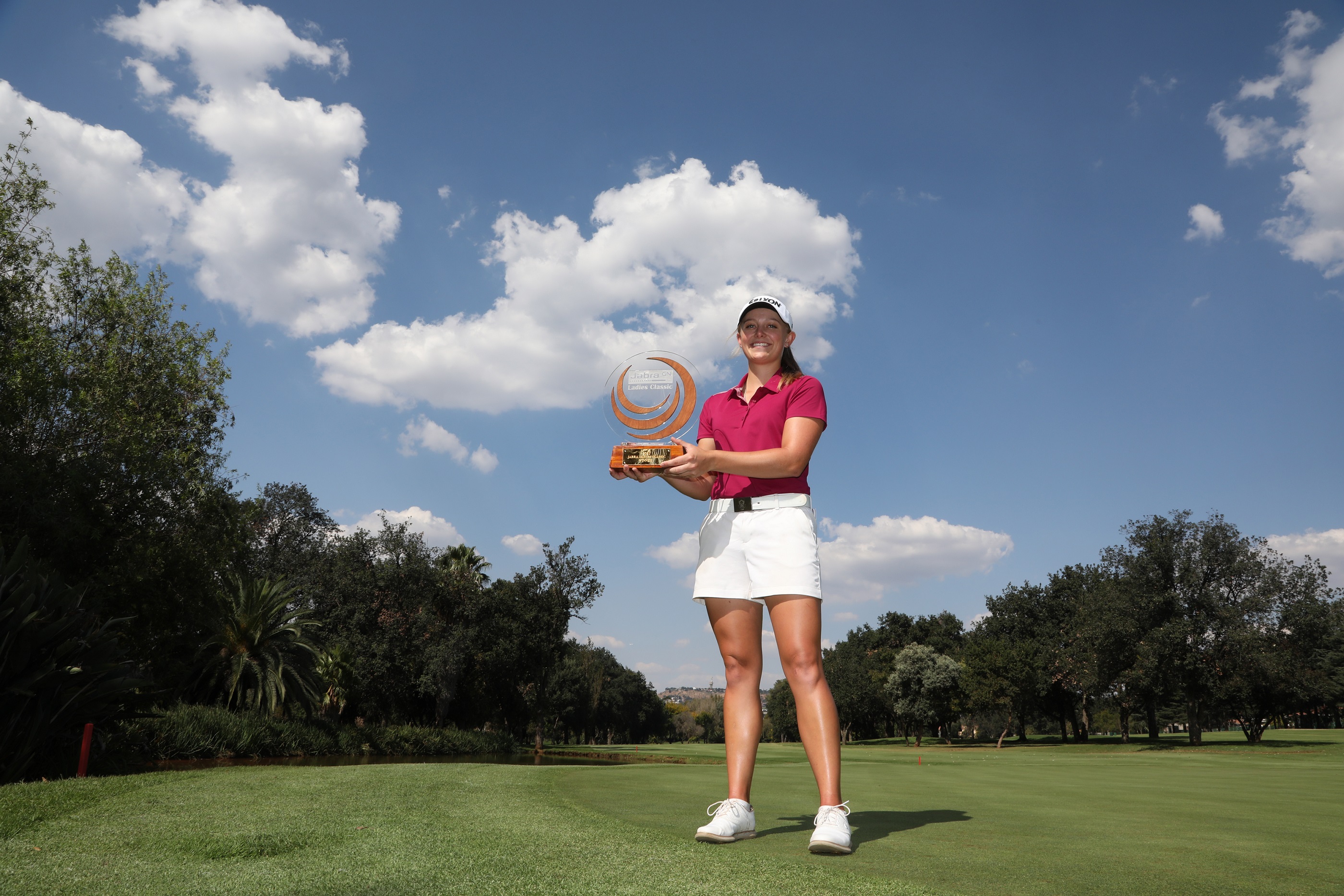 GolfRSA No 1 Caitlyn Macnab made history as the first amateur winner in 14 years on the South African women’s professional golf circuit when she powered to an eight-shot victory in the Sunshine Ladies Tour’s Jabra Ladies Classic at Glendower Golf Club. Photo: Sunshine Ladies Tour.

Two months ago, the Serengeti golfer showed her merciless side as she routed Megan Streicher 11 & 9 in the 36-hole match play final to successfully defend her SA Women’s Amateur title. The amateur was just as ruthless over the last nine holes at Glendower.

Having dropped a trio of shots in her outward loop, Macnab still had a three-shot advantage through the turn and she pulled away from the field with the clinical surge coming home. She notched birdied on the 10th, 11th, 13th, 15th and 17th holes to give herself an unattainable lead coming down the last hole.

“I started birdie, birdie, but I didn’t actually hit the ball great,” Macnab said. “My swing felt a little bit snappy, so I slowed it down and started driving it really well. I was able to avoid the errant shots that cost me in the previous rounds and the putts were dropping, which always helps.”

As an amateur, Macnab can’t share in the R600 000 purse on offer this week, but the historic achievement does earn her coveted spot in the field of the Jabra Ladies Open. The dual-ranking Ladies European Tour and LET Access Series event is also the qualifying tournament for the season’s fourth Major, the Amundi Evian Championship at Evian Resort Golf Club in France from 22-25 July.

“It’s a fantastic incentive from Jabra. Although I am leaving for Texas Christian University in August to take up a golf scholarship, competing in the Jabra Ladies Open will be an incredible opportunity to build more experience,” said Macnab.

Garcia birdied both par fives on the back nine and reduced the gap to six shots with an eagle-two at the 16th, but a double bogey finish for a 68 saw her slip back to tie for second on four-under with Coetzee, who returned a 74.

Kelsey Nicholas, also in her second season in the pro ranks, carded a 71 to grab a share of fourth alongside Pace, who signed for 77, while last year’s Investec Order of Merit winner Monique Smit finished in sixth spot on three-over.

The next stop for the Sunshine Ladies Tour campaigners is Sun City, where Lejan Lewthwaite will take up her title defence in the R400 000 SuperSport Ladies Challenge presented by Sun International at the Gary Player Country Club from 21-23 April.

All competitors RSA unless otherwise specified; amateurs indicated as (a)


I'm a 51 year old woman looking to meet men and women between the ages of 48 and 60.
View Profile