Update: The dog that sniffs for diamonds 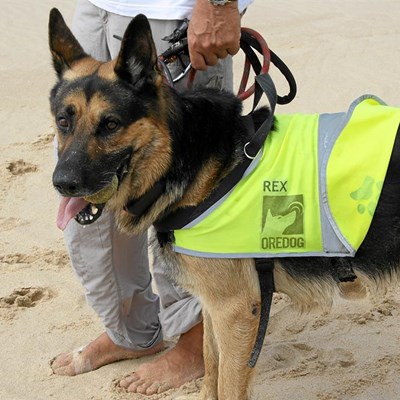 JONGENSFONTEIN NEWS - It is well documented that dogs are being used by the police and military to find illegal contrabands, locating missing people, dead bodies and even find explosives.

Rex, however is a very special dog, actually one of a kind! Rex, a German Sheppard, is alleged by his owner to be the only mineral searching dog in the world. The dog apparently can find diamonds by finding the elusive Kimberlite pipes, as well as gold in gold bearing minerals, such as Arsenopyrite or any other oxide or sulphide bearing rocks. Rex was first taught by his Swedish owner and trainer, Ore and Petroleum Geologist, Peter Bergman to find gold by sniffing out different samples of gold bearing ore.

A Geologist and his dog
South Cape FORUM visited Rex and Peter at their rented beach house in Jongensfontein, near Stilbaai. Peter is currently in Africa for approximately six months to promote Rex and his 'ore dog' skills focusing on mining companies specializing in diamond mining and precious ore minerals. "Rex can sniff out up to 20 to 30 different types of Ore as deep as 12m underground as proven in Sweden. Weather conditions are of no hinder and the depth is probably of no concern in deeply weathered rocks, as in Africa", explains Peter.

Rex is a very friendly, but also obedient and with a single command from Peter he snaps out of 'play' mode into 'work' mode.
This was demonstrated when searching for a piece of Arsenian Pyrite which Peter threw on the beach. According to Peter it is nothing for a dog to cover thousands of hectares per week, which is also an advantage in prospecting for minerals. "I have always been interested in exploration and doing it with dog's makes it easier and faster and more importantly, extremely cost effective for the companies using Ore dogs. We even have a saying in our company, we 'sniff ore and drill core'".

Sniffing since the sixties
Dogs have been used since the sixties to search for minerals like zinc, copper and other sulphide bearing ore minerals. Dogs have apparently over 200 smelling receptors which make it an easy task- if the dog is properly trained to search for these rare minerals. Ore dogs have been used extensively in Sweden, Finland, Russia, and Canada and, mainly to search for nickel for the steel industry and other sulphide minerals. With the decline of the metal and steel industry and the following financial crisis in the early 80', mineral exploration was brought to a stop causing the ore sniffing dogs and their geologist handlers to literally discontinue.

Ironically, it was during this time that Peter completed his Geology degree but due to unemployment in the field, ended up venturing into IT. He knew about the ore dogs which were used and decided many years ago to start using ore dogs professionally again after extensive studies in the field on how to improve mineral exploration methodology in new areas as Ore dogs.

A future of sniffing diamonds
It is Peter's ambition to revive ore sniffing dogs in the mining industry, saving companies millions, if not billions in prospecting costs. Using this age old tradition can cause a revolution in the mining industry, he emphasises, "it not only a cheap way to find precious minerals, but also environmental friendly". Mining ore is not the difficult part of mining, but finding the deposits has always been the challenge, which makes ore dogs perfect for the job.

In mining, geophysics, remote sensing, historical records of old mines as well as other techniques are used to discover rare minerals. This comes at high cost as it requires a lot of training and skill to operate the equipment and technology as well as time consuming. He explains, "It is cheaper to use dogs than machinery, for instance in Sweden with our long winter it is beneficial to work with dogs because they can handle the snow and marshlands. We track the mineral dogs in the winter via GPS (both Rex and Peter has a GPS device, Rex wears his on his collar) and then return in the summer to mine for the ore dogs found minerals, when the ice and snow has melted away". The dogs are easy to train and take to sniffing for minerals very quickly. Therefore, he hopes that renewed interest will be sparked by Rex which can lead to investments in training more dogs.

Obtaining a sense for minerals
Peter opened the first 'Enhanced Sensibility Laboratory' in Sweden where dogs, mostly German Sheppard's, are trained to become professional ore sniffer dogs. "Rex is now 5 years old, I have been training him for four years.
Ore dog AB, his company also sprouted from this dream which has now become a full time passion for Peter- literally a man and his dog on a mission to change the way an industry functions. Hoping to bring to attention, age old traditions where the unique sense of a dog can outwit any mechanises system in use today. Since Peter's decision to revive the tradition of using ore dogs in mining, both geologist and dog have been travelling the globe.

Rex has attracted his own fame, featuring in various documentaries & TV shows, even programs in Discovery Channel. Currently Peter is also writing a book for the publisher Elsevier, titled, "Ore dogs, and the future of mineral exploration."

We bring you the latest Hessequa news'