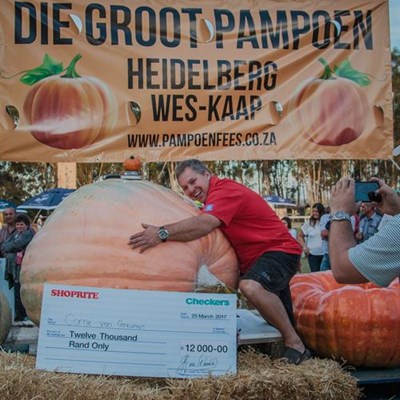 Corné van Greunen with his winning pumpkin
HESSEQUA NEWS & VIDEO - Cinderella would've been beside herself with Corné van Greunen's 519,5kg pumpkin, the pumpkin that took first place at the 7th annual Giant Pumpkin Festival in Heidelberg this weekend.
The winning pumpkin broke the previous South African record of 506kg held by Shirley Olivier, a female farmer from the Midvaal, Gauteng, but was unfortunately 36,5kg short of the new South African record of 556kg set by Hugo le Roux at the Goliat van Gat Pampoenfees in Pretoria also on Saturday.

Van Greunen’s winning pumpkin was grown from the special hand-selected pumpkin seeds supplied by Shoprite Checkers to the sixty-five entrants. Imported from Canada and especially bred for size, Dill’s Atlantic Giant is the grand-daddy of giant pumpkins. Non-treated or genetically modified in any way, these seeds are the variety of choice for those wishing to produce pumpkins in excess of 300kg.

This is just another way Shoprite Checkers supports local farmers and works with them to develop and produce the best for consumers.

“I knew my pumpkin was heavy, but I didn’t expect it to be this heavy. There is a secret as to how I got it this big, but the secret is all mine,” said Van Greunen light-heartedly.

“I have participated in this competition for the past five years, but have only once had my pumpkin weighed in the final. It is too easy to make a mistake with these big pumpkins, such as giving it too much water and then it rots.”
Van Greunen was followed closely by Jaco Uys who was awarded second place with his 387,5kg pumpkin with Louwrens van Deventer, last year’s champion, finishing in third place with a 385,5kg pumpkin.

As champion of the 2017 Giant Pumpkin Competition, Van Greunen received R12 000 in cash while second and third place received R6 000 and R3 000 respectively. Prize money was sponsored by Shoprite Checkers and additional prizes were also awarded for the smallest, prettiest and ugliest pumpkins.

The two-day festival, held at the Heidelberg Showgrounds, is a one-of-a-kind event with a variety of activities for young and old including a MTB race, 35km trail run, pumpkin carving and pumpkin throwing competitions as well the making of a massive 1.2 x 2.2m pumpkin pie.


In keeping with Heidelberg’s strong community spirit, all proceeds from the festival are ploughed back into the town, benefitting various local schools and the old age home.
Click here for a photo gallery.